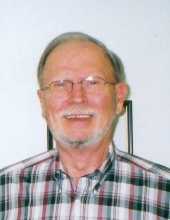 On December 24, 1988 Ed was united in marriage to Judy A. (Woolery) Fairbanks in Harrisonville, Missouri.

Ed was employed 38 years as a receiving manager for the Sears Metcalf Store, Overland Park, Kansas until his retirement in 1996. Later, he was employed for 15 years at O'Reilly Auto Parts to keep himself busy until his full retirement in 2016. He was an Army veteran serving as a M.P. After retirement, he became known as 10 cent Eddie at the local casino's where he played the slot machines. Ed always had a special place in his heart for his 4 legged companions and was a lifelong resident of Kansas City, Kansas.

He was preceded in death by his parents, a son, Mark Pajer on December 21, 2014; a grandson, Tristin Fairbanks.

The family received friends Monday, July 29, 2019 at the funeral home.

The family suggest that memorial contributions may be made to ASANA Hospice.
To order memorial trees or send flowers to the family in memory of Edward "Ed" Pajer, please visit our flower store.