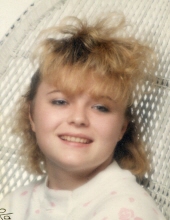 Elizabeth Jolene Deal of Archie, Missouri was born December 25, 1975 in Harrisonville, Missouri the daughter of William Eugene Cantrell and Juanita Kay (Jones) Deal. She departed this life on Monday, February 25, 2019 at the Valley Hospital Medical Center, Las Vegas, Nevada at the age of 43 years and 2 months.

On September 23, 2000, Elizabeth was united in marriage to Samuel Oscar Deal at the Austin Baptist Church near Archie, Missouri.

Elizabeth was employed as an installer of TV and Internet services. She was baptized at a young age and was a member of the Assembly of God Church. She loved to read, garden and raise exotic chickens.

She was preceded in death by her father, William E. “Billy” Cantrell; her husband, Samuel “Sam” Deal on July 17, 2017; a son, Alexander; a daughter, Savanah and a sister, Debra Souther.

Funeral services were held Friday, March 8, 2019 at the Dickey Funeral Home, Garden City, Missouri with burial in the Austin Cemetery near Archie, Missouri.
To order memorial trees or send flowers to the family in memory of Elizabeth J. (Cantrell) Deal, please visit our flower store.