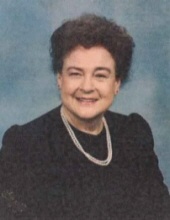 Elsie was born July 22, 1924, to Earl and Lucia Moore in Garden City, Mo. She married Charles W. Kelly on May 26, 1945, during his service in the 8th Air Force. He preceded her in death in January 1999. She was also preceded in death by her parents, a sister, Edna (Moore) Rudisaile, and a granddaughter, Jenny Kelly. She was a member of the First Baptist Church of Harrisonville, Mo.

Elsie learned to play the violin in high school and played with the Garden City Orchestra before outdoor movies in the summertime. While in college, she played violin in a stringed quartet.

Elsie attended Southwest Baptist College in Bolivar, Mo., during the war years, later earning her bachelor’s degree from Central Missouri State University. She was an elementary school teacher for 43 years, serving in the Latour, Garden City, East Lynne and Lee’s Summit, Missouri, school districts where she was beloved by many, and she, in turn, loved her many students. Following her retirement in 1987, she traveled extensively including visits to the British Isles, Eastern Europe, Russia, Australia and China bringing back many paintings and local craft works to enhance her home.

Graveside services will be held 11:00 A.M., Wednesday, November 11, 2020 at the Dickey Funeral Home, with interment at Orient Cemetery, Harrisonville, Mo.

Flowers are appreciated, but for those wishing to make a monetary remembrance, the family requests they be made to Living Community of St. Joseph, 1202 Heartland Road, St. Joseph, MO 64506, to whom the family wishes to express its heartfelt gratitude for the loving care Mother received the last 12 years.
To order memorial trees or send flowers to the family in memory of Elsie N. Kelly, please visit our flower store.