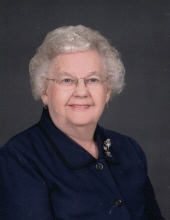 Erma Ardis Plank of Garden City, Missouri was born January 5, 1930 near Hartwell, Missouri the daughter of Loyd Powers and Mona May (Kisor) Hutson. She departed this life on Thursday, April 18, 2019 at Research Medical Center, Kansas City, Missouri at the age of 89 years, 3 months and 13 days.

On June 11, 1947 Erma was united in marriage to Chester Roland Klopfenstein and later married Robert G. Plank on November 20, 1993.

Erma was employed as a bookkeeper for Kelsay Feed and Grain in Urich, Missouri and was later employed as a bookkeeper for Kingsville Livestock Auction, Kingsville, Missouri until her retirement. She was an active member of the United Methodist Church, Garden City, Missouri and was involved in many church committees and activities. A member of the Golden Valley Memorial Hospital Auxiliary, Clinton, Missouri, Since the age of 21, Erma served as secretary and Board Member for the Norris Cemetery Association. Erma liked to quilt, crochet and play cards. Erma had lived near Urich before moving to Garden City in 1992.

Besides her parents, Erma was preceded in death by her first husband, Chester on July 26, 1986 and her second husband, Bob on August 9, 2009.

The family suggest that memorial contributions may be made to the Norris Cemetery Association.
To order memorial trees or send flowers to the family in memory of Erma A. Klopfenstein Plank, please visit our flower store.