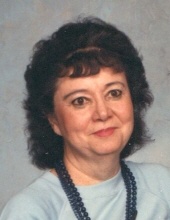 Eva Maxine Gillespie, of Harrisonville, Missouri was born March 2, 1929 in Kansas City, Kansas the daughter of Albert Lee and Lucy Ora (Breese) Logsdon. She departed this life on Thursday, September 10, 2020 at the Brone Care Center, Nevada, Missouri at the age of 91 years, 6 months and 8 days.

On March 12, 1948, Maxine was united in marriage to Robert “Bob” Aaron Gillespie in Kansas City, Missouri.

Maxine was a veterinary assistant for a Vet Clinic in Kansas City, Missouri. She was a member of the East Lynne Baptist Church, East Lynne, Missouri. Maxine loved bowling and bowled in several leagues at the bowling alley in Harrisonville. She enjoyed oil painting, raising her dogs, playing cards, gardening and spending time with her great-grandchildren.

Besides her parents, she was preceded in death by her husand, Bob Gillespie on August 5, 2005; her daughter, Victoria Tudor on September 30, 2017; a great-grandson, Aaron Warren on April 23, 1999; four brothers, Edgar, Melvin, Orvel and Arlie; five sisters, Mary, Zella, Sadie, Fay and Lena.

A Graveside service will be 2:00 p.m., Monday, September 14, 2020 at the Mt. Moriah Cemetery, Kansas City, Missouri.
To order memorial trees or send flowers to the family in memory of Eva Maxine Gillespie, please visit our flower store.