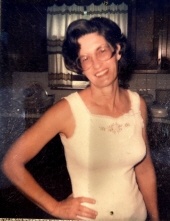 Besides her parents, she was preceded in death by her brother Donald E. Greenwell, Jr. on October 4, 2020 and her son Daniel Pendleton on June 22, 2012.

Evelyn graduated from Belton High School in 1954 where she was the drum majorette, and head cheerleader.

Evelyn was a seamstress and a homemaker.

Evelyn and Charles moved to the area on a farm in Creighton, MO and then a second farm in Garden City, MO before finding their home in town in Garden City, MO where they had been for 50 years, before Charles passed and Evelyn moved in with her daughter in Lee’s Summit where she passed at 86 years old.

Evelyn and Charles loved to camp. Almost every weekend they would go camping at the strip pits, Montrose, Lake Paradise and Truman Lake.

Two words describe my mother, powerful tornado. The amount of work that woman did on a daily basis was extraordinary. On the farm she worked an acre garden. Evelyn weeded, harvested, canned and pickled everything it produced to feed us in the winter months as well as the summer months. She did laundry on an old wringer wash machine, and hung the clothes on the line to dry, even in the winter time. She ironed everything. Evelyn would sprinkle the clothes down with liquid starch and roll them up and place them in a laundry basket until she could get to them later that day. Evelyn cooked full home cooked meals every meal, and every meal was on time when my dad walked in the door so he could get out to the farm work after working a full day at Bendix. Mom dressed chickens, gathered eggs, scraped off the cream from the cows milk and made butter in the butter churn on a regular basis. She washed dishes by hand, kept a very clean house and sewed clothes for me to wear, but every day she would take time out in the afternoon to sit down and read me a book. It was our time. When we moved to town, Mom took me to twirling lessons, even to Midway. She did not like to drive but she did it for me. A very selfless person.

Evelyn and Charles took great pride in their home, yard and garden. One of the best kept in town. Charles and Evelyn were generous with their time volunteering, helping with Church, vacation bible school, and Evelyn was always baking for someone or something that needed a pie, cake, cookies or their famous ice cream. At Christmas they would make divinity and pecan brittle and pass out as much as they could to friends and family. They bought 25 bushel of apples every year and passed them out. It was their way of showing they cared about you. My parents cared a lot about the town they lived in and the people who lived there. They gave money to the preacher to help someone who needed it. Never wanting anyone to know it came from them. They were selfless and proud to be residents of Garden City.

Evelyn will be laid to rest next to her husband Charles in the Garden City Cemetery.

The family request that masks are to be worn and to practice social distancing while attending the service.

Services will be live streamed on The Garden City Methodist Church facebook page on the day of the services starting live at 10:30 a.m.
To order memorial trees or send flowers to the family in memory of Evelyn A. Pendleton, please visit our flower store.