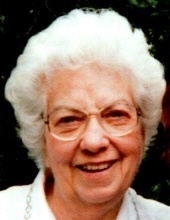 Willie Fern Elizabeth (Young) Reynolds, 97, of Pleasant Hill, Missouri, formerly of Odessa, Missouri, was born, January 13, 1924, in Napoleon, Missouri, the daughter of Henry G. and Ida May (Krutzmann) Young. She departed this life, Thursday, March 4, 2021, at her home surrounded with love and family.

On December 12, 1940, she was united in marriage to John R. Reynolds in Richmond, Missouri.

When WWII started there was a need for female employees to support the war effort. Fern went to work for North American in 1943. She worked as a “Rosie the Riveter” and was involved in the manufacturing of the B24 Liberator. She went to work for Bendix in 1952 and retired after 35 years of service in 1987. She was a member of the Lake Lotawana V.F.W.Post #6272 Auxiliary and the St. Robert Bellarmine Catholic Church, Blue Springs. She enjoyed being outside working in the garden or watching the wildlife on her property, and playing cards. She most loved spending time with her children, grandchildren, and great grandchildren. She was a wonderful mother, grandmother, and great grandmother. She never met a stranger and was selfless in her service to others.

A celebration of Fern’s life will be held 3:00 p.m. Friday, March 12, 2021, at the Stanley-Dickey Funeral Home. Reverend Chris Middleton of the Evangelical Free Church, Wellington will officiate. Inurnment will be in the Missouri Veterans Cemetery, Higginsville, at a later date.

Visitation will be held from 2:00 p.m. until service time at the funeral home.

Memorial contributions are suggested to the Pleasant Hill Lay Clergy Love Fund or the City Union Mission and may be sent in care of the funeral home.