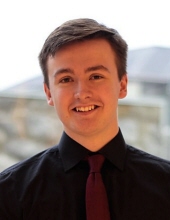 Fletcher Alexander Reeves, 20, of Pleasant Hill, Missouri, was born, March 11, 1998, in Shawnee, Kansas, the son of Clinton William and Anita (Alexander) Reeves. He departed this life, Friday, September 28, 2018, as a result of injuries sustained in an automobile accident near Warrensburg, Missouri.

Fletcher attended the Strasburg, Missouri, elementary school from Kindergarten through 8th grade graduating in 2012. He then chose to attend the Lone Jack, Missouri, High School graduating in 2016. In high school he was active in choir, band, and track, as well as qualifying for the State Cross Country meet all four years. He was currently a junior at the University of Central Missouri in Warrensburg studying Public Relations and Finance.

Fletcher was an active member of the Pleasant Hill United Methodist Church and was strong in his faith. He enjoyed running, snow skiing, water skiing, and cars. He especially loved spending time with family and friends.

Fletcher was preceded in death by his maternal grandparents, James and Lois (Dixon) Alexander.

He is survived by his parents Clint and Anita of Pleasant Hill; paternal grandparents, Willis (and Ann) Reeves, and Fern (and Ken) Salmen, all of Madison, Nebraska; other relatives and a host of many friends.

A celebration of Fletcher’s life was held October 7, 2018 at the Pleasant Hill United Methodist Church. Reverend Dave Owsley will officiate.

Memorial contributions are suggested to the Fletcher Reeves Memorial Fund which has been established with F&C Bank in Lone Jack and may also be sent in care of the funeral home.

Online condolences may be sent the family at www.stanleydickeyfuneralhome.com