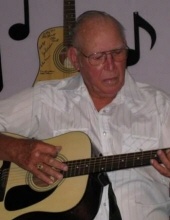 Floyd Allen Herrell of Harrisonville, Missouri was born October 31, 1929 in Everett, Missouri the son of Lewis Milford and Nora Iona (Lucas) Herrell. He departed this life on Monday, July 15, 2019 at his home surrounded by love and family at the age of 89 years, 8 months and 15 days.

On September 2, 1950 Floyd was united in marriage to Phyllis Ann Calhoun in Harrisonville, Missouri and later married Ann Riggs in Gardner, Kansas.

Floyd was employed as a supervisor for General Motors, Leeds Plant, Kansas City, Missouri until his retirement in 1983. He was a United States Army veteran of the Korean War, a member of Grand River Masonic Lodge #276 A.F.& A.M., Freeman, Missouri, the Ararat Shrine, Kansas City, Missouri. He enjoyed playing in the band at the West Line Opry. Floyd loved his family, fishing, the outdoors, haying and tending to his cattle. He was a lifelong area resident.

Besides his parents, Floyd was preceded in death by his first wife, Phyllis on February 8, 1995; his son, Floyd "Butch" Herrell, Jr.; and a brother Virgil Herrell.

Funeral services were held Saturday, July 20, 2019 at the Dickey Funeral Home, Harrisonville, Missouri with burial in the Brady Cemetery near Harrisonville.

Family suggests memorial contributions may be made to the Shriners Hospital.
To order memorial trees or send flowers to the family in memory of Floyd Allen Herrell, please visit our flower store.