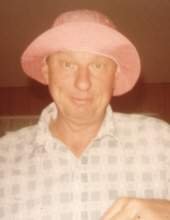 Floyd Wayne Turner of Creighton, Missouri was born December 26, 1932 near Urich, Missouri the son of Aaron Ougburn and Adeline Bertha (Getz) Turner. He departed this life on Sunday, September 9, 2018 at the University of Kansas Medical Center, Kansas City, Kansas surrounded by love and family at the age of 85 years, 8 months and 14 days.

On December 26, 1953 Floyd was united in marriage to Grace Yvonne Ewing in Urich, Missouri.

Floyd was a farmer and stockman and was employed as a truck driver for Cass County Concrete, Harrisonville, Missouri until his retirement in 1996. He was a United States Air Force veteran of the Korean War. Floyd was a member of the First Christian Church, Creighton, Missouri, American Legion Post #371, Urich, Missouri, Teamsters Union Local #541, Kansas City, Missouri. He attended Warrensburg Teachers College, Warrensburg, Missouri and was a lifelong area resident. After retirement, Floyd and Yvonne enjoyed camping and attending the races.

Besides his parents, Floyd was preceded in death by his brother, Ewald.

Cremation. A Celebration of Life Service was held Thursday, September 13, 2018 at the Dickey Funeral Home, Garden City, Missouri.
To order memorial trees or send flowers to the family in memory of Floyd Wayne Turner, please visit our flower store.