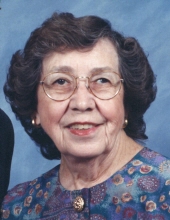 On June 1, 1947, she married Ralph Walter Kochsmeier at her parents' home near Garden City. Because of her husband's Navy career, they lived in Gardner, KS, Arlington, TX, San Leandro, CA and Pearl Harbor, HI, before settling down in Harrisonville, MO, in December 1962. In 2007, she and Ralph moved to Aberdeen Village Retirement Community in Olathe, KS.

Frances was a long time member of Harrisonville United Methodist Church, the United Methodist Women, and the Progressive Priscillas Extension Club. She enjoyed gardening, sewing, cooking, crossword puzzles and knitting. Over the years she has knitted countless caps and blankets for newborns, and hats, mittens and scarves for the homeless.

Frances was preceded in death by her parents, her husband and a sister, Marcia Gilkeson Perdue.

Funeral services were held Thursday, July 19, 2018 at the Dickey Funeral Home, Harrisonville, Missouri with burial in the Orient Cemetery.

In lieu of flowers, family suggests memorial contributions may be made to the United Methodist Church, 2600 E. Mechanic St., Harrisonville, MO 64701 or to the Olathe Health Hospice House, 20375 W 151st Street, Olathe, KS. 66061.
To order memorial trees or send flowers to the family in memory of Frances L. Kochsmeier, please visit our flower store.