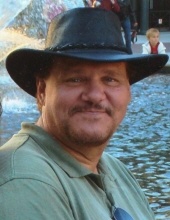 Audrey Franklin “Frank” Jones, of Lee’s Summit, Missouri was born August 13, 1959 in Independence, Missouri the son of Herbert Lewis and Betty Jo (Morgan) Jones. He departed this life on Saturday, March 21, 2020 at the Truman Medical Center – Hospital Hill, Kansas City, Missouri at the age of 60 years, 7 months and 8 days.

On March 7, 1977, Frank was united in marriage to Glenda Faye Smith in Jackson County, Missouri.

A private graveside was held on Wednesday, March 25, 2020 at the Garden City Cemetery, Garden City, Missouri.

A Celebration of Life Service at a later date at the Dickey Funeral Home, Harrisonville, Missouri.
To order memorial trees or send flowers to the family in memory of Frank Jones, please visit our flower store.