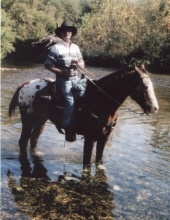 Garry Gail “Cowboy” Prather, of Harrisonville, Missouri, was born January 12, 1951 in Kansas City, Missouri the son of Audrey and Wilma Lenore (Wiley) Prather. He departed this life on Monday, April 5, 2021 at the St. Luke’s Hospital, Kansas City, Missouri at the age of 70 years, 2 months and 24 days.

On July 20, 1985, Garry was united in marriage to Sharon Becker in Raytown, Missouri and later divorced but remained best friends over the years.

Garry was employed was a fork lift driver for General Mills in Kansas City, Missouri. He loved riding horses and being outdoors. When Garry was younger, he enjoyed hunting, fishing and trail riding with his horse. As you all know Garry never met a stranger & loved everyone who would lend an ear to his jokes or quick wit. He very seldom got angry or upset. He never spoke bad (poorly) of anyone else & consistently moved at one pace (slow). Garry had a lot of surgeries & discomfort throughout his life but very seldom did he complain. The only way to tell if he didn’t feel good was if his bar stool was cold or empty at Fugley’s.

Garry was preceded in death by his parents.

A special thanks to Jim & Kathy Minshall for everything they did to help, honor & assist Garry for many years. A big thanks to Brian Chamberlain, Gary Cantrell, David Engleman & Mark Kirk for their hard work cleaning out Garry’s house.

Thank you all for being a very special part of Garry’s life and celebrating with us today.

Cremation. A Celebration of Life Service will be held 7:00 p.m., Tuesday, April 13, 2021 at the Dickey Funeral Home, Harrisonville, Missouri.

Family suggests memorial contributions may be made to Sheps Place Senior Dog Sanctuary, Independence, Missouri.
To order memorial trees or send flowers to the family in memory of Garry "Cowboy" Prather, please visit our flower store.