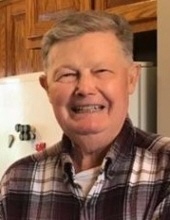 Gary J. Fuhr, 75, of Pleasant Hill, Missouri, formerly of Oak Grove, Missouri, was born, January 5, 1944, in Braymer, Missouri, the son of Marvin J. and Ruby C. (Shaffer) Fuhr. He departed this life, Friday, August 9, 2019, at his home surrounded with love and family.

Gary was a 1962 Braymer High School graduate. He proudly served in the Missouri National Guard from 1964 to 1970.

Gary had been employed as a truck driver for the United Parcel Service (UPS) retiring in January 2007. He was a member of the Teamsters Local #41 and was a self-proclaimed member of the “Red Neck Yacht Club”. He enjoyed hunting, fishing, gardening, working his cattle, and working his farm cutting wood and clearing fence rows; basically anything that included working outdoors.

Gary was preceded in death by his parents and one infant son, Matthew Fuhr.

He is survived by his wife, Pat of the home; his daughter and son-in-law, Stacy (and Scott) Long of Pleasant Hill; his son, Gary Jeffery Fuhr of Grain Valley; two grandchildren, Baylee Long and Megan Long, both of Pleasant Hill; three brothers, Kenneth D. Fuhr of Sun City, Arizona, Leo (and Jeanette) Fuhr of Raymore, Missouri, and Larry (and Tricia) Fuhr of Hamilton, Missouri; one sister, Karen (and Duane) Hartley of Kingston, Missouri; several nieces and nephews; other relatives and many friends.

A celebration of Gary’s life was held Wednesday, August 14, 2019, at the funeral home. Reverend D. Kent Deubner officiated with the eulogy by his niece, Lisa Frogg.

Memorial contributions are suggested to the St. Jude Children’s Research Hospital or Crossroads Hospice and may be sent in care of the funeral home.