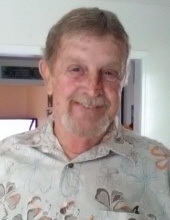 Gary Lee “Mitch” Mitchell, 69, of Harrisonville, was born, September 25, 1950, in Harrisonville, the son of Earl W. and Clarice Jean (Ferguson) Mitchell. He departed this life, Friday, October 4, 2019, at his home surrounded with love and family.

On February 1, 1982, he was united in marriage to Laura Kaye Vinzant in Pleasant Hill.

Gary was employed as a rough in carpenter for numerous builders; he was most proud of the house he built for Joe and Anna Marie. He enjoyed hunting and fishing. He especially enjoyed sitting and visiting on the porch at his home, at the lake house, or over at Joe and Anna Marie’s.

Gary loved all that he included as his “family” and all those close to him that weren’t blood relatives. These included his beloved daughter Rai (his deer hunting buddy and Stanley); his granddaughter and “apple of his eye” Klara Jean; his son Ryan; Ronnie who he considered a brother; the Anderson boys, Shawn, Easton and Evan; his “pard” Ron Barrett; Les Branstine; and Jenni Bredeman and her parents Dan and Vicki Bredeman.

Gary was preceded in death parents; one sister, Heather Parris; and one nephew, Ronald Earl Parris.

He is survived by his wife Laura of the home; two daughters, Rai “Raizzy” (and Matt) Wisner of Grandview, and Jennifer Mitchell of Pleasant Hill; his son Ryan (and Stefanie) Sims of Pleasant Hill; seven grandchildren; two sisters, Anna Marie (and Joe) Shepherd of Rackett, Missouri, and Mary Jane Mitchell of Graham, North Carolina; other relatives and friends.

Per Gary’s wishes cremation has been accorded.

A celebration of Gary’s life will be held at a later date.