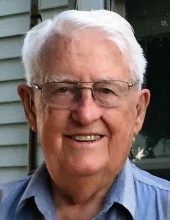 Gene graduated from the Lone Jack High School in 1945. He spent four years (1951-1955) in the US Air Force as a photographer - 18 months of which was spent in the Philippines. He graduated from Indiana Technical College in Fort Wayne, Indiana, with a Bachelors of Science in Electronic Engineering in 1959.

Gene was also preceded in death by his parents and twin sisters, Wilma Murial Mallicoat and Wanda Pearl Cassidy.

Visitation was held one hour prior to the service at the church.

Memorial contributions are suggested to the Lone Jack Cemetery and may be sent in care of the funeral home.