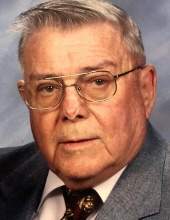 Gene J. “Jeep” Takacs, 90, of Lee’s Summit, formerly of Pleasant Hill, was born, August 15, 1928, in Bethlehem, Pennsylvania, the son of Stephen and Elizabeth (Hajocs) Takacs. He departed this life Tuesday, December 25, 2018, at Addington Place in Lee’s Summit, surrounded with love and family.

On December 1, 1951 He was united in marriage to Rita Ann Masiado in Bethlehem.

Jeep was a United States Marine Corp Vietnam veteran proudly serving 20 years. Following retirement from the Marine Corp he was employed as an accountant for the General Accounting Office and Marine Corp Finance Center in Kansas City, retiring on May 31, 1986.He was a member of the St. Bridget Catholic Church, the Knights of Columbus Council #13113, and the Veteran of Foreign Wars Post #3118.

Mass of Christian Burial will be held 7:00 p.m. Friday, January 4, 2018, at the St. Bridget Catholic Church. Father Curt Vogel will officiate. Military honors will be provided by the U.S. Marine Corp following the Mass.

Memorial contributions are suggested to the Knights of Columbus and may be sent in care of the funeral home.