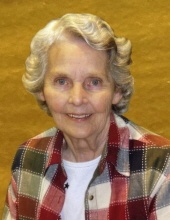 Geneva Lee Schrock of Garden City, Missouri was born October 1, 1932 near Dayton, Missouri the daughter of Edgar Leroy and Hilda Odessa (Hunt) Breeden. She departed this life on Saturday, February 12, 2022 at Crown Care Center, Harrisonville, Missouri at the age of 89 years, 4 months and 11 days.

On October 16, 1948 Geneva was united in marriage to Noah William “Bill” Schrock in Garden City, Missouri.

Geneva was a homemaker and for many years was responsible for getting the water bills out to the residents of Garden City. She was a lifelong area resident of Garden City and was baptized at an early age at the First Baptist Church. Geneva was a charter and faithful member of the Jolly 60’s group and was called the Calendar Girl for the singing ministry at all the local nursing homes. Geneva was called “Grandma Schrock” by all of her family and friends in Garden City.

Besides her parents, Geneva was preceded in death by her husband, Bill on March 3, 1994; a son, Chuck Schrock on September 10, 2015; a grandson, Randy Schrock on October 5, 1988; a brother, Richard; her 2 sisters, Bonnie Francy and Georgia Wainwright.

Geneva is survived by her 2 sons, William “Billy” Schrock (Donna), Dennis Schrock (Lynn) all of Garden City, Missouri; 2 daughters, Peggy Martin (Joe), Susie Rudell (Lloyd) all of Harrisonville, Missouri and Selena their grand-daughter who Bill and Geneva lovingly raised; 20 grandchildren; 37 great-grandchildren; 8 great-great-grandchildren; other relatives and a host of friends.

Family suggests memorial contributions may be made to the Charity of one's choice.

To view video click on Tribute Wall.
To order memorial trees or send flowers to the family in memory of Geneva Lee Schrock, please visit our flower store.