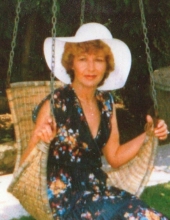 Genevieve Donie Morganelli of Harrisonville, Missouri was born March 3, 1935 in Atwood, Oklahoma the daughter of George Washington and Vergie Helen (Haney) Flud. She departed this life on Saturday, March 10, 2018 at her home in Harrisonville surrounded by love and family at the age of 83 years and 7 days.

On March 28, 1983 Genevieve was united in marriage to John Richard Morganelli in Las Vegas, Nevada.

Genevieve was a homemaker. She attended several Pentecostal churches, enjoyed cooking, doing crafts and attending the church's ladies auxiliary activities. She grew up in Atwood, Oklahoma and had lived in Oklahoma before moving to Harrisonville in December of 2012. Genevieve had a great love for reading and music and always enjoyed listening to Bill Gaither programs.

Besides her parents, Genevieve was preceded in death by her husband, John R. Morganelli on September 20, 2013; two sons, Gary and Jim; a daughter, Suzette; a grandson, Jordan.

Genevieve is survived by three sons, Dennis, Sam and Johnny; her daughter, Christie; a step-son, John Jr., a step-daughter, Christina; several grandchildren and great-grandchildren; two sisters, Geneva and Genice; other relatives and a host of friends.

The family will receive friends Saturday, March 17, 2018 from 12:30 p.m. - 2:00 p.m. at the funeral home.
To order memorial trees or send flowers to the family in memory of Genevieve D. Morganelli, please visit our flower store.