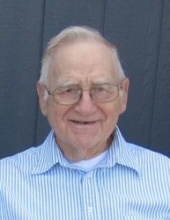 George Calvin Miller, 94, passed away peacefully on October 25, 2018 at the Missouri Veteran’s Home-Warrensburg. George was born near Garden City, Missouri on July 8, 1924 to John V. Miller and Letha Mae (Helmuth) Miller. He graduated High School from Garden City, Missouri. George enlisted in the Air Force and trained as a machine gun turret operator on a B-29 Superfortress during WWII. George was a farmer all his life raising corn, beans, cattle, hogs and three children. George and his wife were members of Creighton Christian Church in Creighton, Missouri.

George was united in marriage to JoAnne (Douglas) Miller on October 15, 1954, who preceded him in death.

George was a wonderful, quiet, humorous man-loved and respected by those who knew him. He enjoyed sports (primarily baseball) He played baseball as a young man, coached his son’s little league teams and was the croquet champion of the family! He served on the School board at East Lynne Elementary during his kid’s school years.

Funeral service will be Saturday, November 3, 2018, 10:o0 am at the Dickey Funeral Home in Garden City, MO. Burial will be at Clearfork Cemetery.

In lieu of flowers, contributions may be given to: Veteran’s Assistance League, c/o Missouri Veteran’s Home-Warrensburg, 1300 Veterans Rd, Warrensburg, MO 64093
To order memorial trees or send flowers to the family in memory of George Calvin Miller, please visit our flower store.