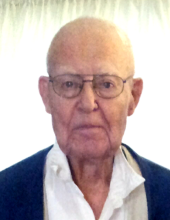 George William Irey of Harrisonville, Missouri was born February 21, 1925 in Powhattan, Kansas the son of Elza Franklin and Littia (Clement) Irey. He departed this life on Wednesday, February 12, 2020 at his home at the age of 94 years, 11 months and 21 days.

On March 25, 1946, George was united in marriage to Marjorie Maxine Wade in Kansas City, Missouri.

George was employed as a relief man for General Motors Leed’s Plant, Kansas City, Missouri until his retirement in 1974. He was an amateur inventor and was the family photographer. George enjoyed bowling, watching and following golf, the outdoors, hunting and fishing. He loved to do woodworking and he built a row boat in his basement as well as his cabinets for his house.

Besides his parents, he was preceded in death by a great-grandson, Ayden Carpenter; his son-in-law, Peter Gent; two brothers, Frank and Wilbert Irey; two sisters, Virginia Sams and Ione Lott.

Cremation. A private family service will be held at a later date.

Funeral arrangements are under the direction of the Dickey Funeral Home, Garden City, Missouri.
To order memorial trees or send flowers to the family in memory of George W. Irey, please visit our flower store.