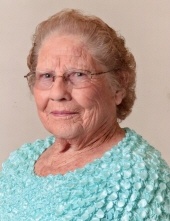 Georgia Marie Cumpton of Garden City Missouri was born in a small house in Altona, Missouri on November 6, 1925 to Jesse H and Irene F (Bridges) Brown. Georgia went to be with the Lord on February 3, 2020 at the age of 94 years, 2 months and 28 days at Belton Regional Hospital in Belton, Missouri.

Georgia, better known as Mother or Nanny, learned what hard work was when she went to work on the family’s dairy farm. Georgia graduated from the Garden City High School in 1943. Upon graduation she went on to attend college in Warrensburg, driving every day on mostly dirt roads to get her teaching certificate. Georgia taught at the #8 School, a one room schoolhouse just a few miles outside of Garden City.

Georgia met and fell in love with Guy Dorven Cumpton, who was soon called to serve his county and was shortly thereafter stationed in Colorado. She traveled to Colorado Springs and the two were united in marriage on May 6, 1944 at Camp Carson. Georgia came back to Missouri and stayed at home with her parents while Guy Dorven served over seas.

In 1950 Georgia signed up with Avon and never looked back. She was an excellent saleswoman that cared deeply for her customers and took great care of them, while still caring for three small boys at home. Georgia is known far and wide as “the Avon lady” and continued selling Avon right up until her death. She was so successful that she had made the Honor Society and Presidents Club several years standing and has won several awards throughout the years. By selling Avon Georgia was able to purchase her first car all on her own.

In 1951 Guy Dorven and Georgia built a house in Dayton, where she has spent the remainder of her life raising their five boys. Together she and Guy purchased straight trucks and hauled cattle. Several trips a year were made to the Kansas City Stockyards as well as all over the United States. It was always a family affair where they would load up the boys and off they would go. Along with hauling cattle Georgia was well known for hauling water to everyone around.

Georgia was a member of the Dayton Community Church and enjoyed serving the Lord and spreading the gospel. In 1952 Georgia and her family worked tirelessly helping rebuild the church after a fire. She headed up several fundraising activities to help build the church addition in 2002.

The family received friends Thursday, February 6, 2020 at the church.

Family suggests memorial contributions may be made to the Dayton Community Church Memorial Fund.
To order memorial trees or send flowers to the family in memory of Georgia Cumpton, please visit our flower store.