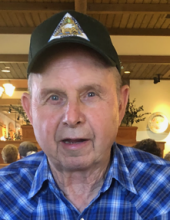 Glen Robert Clark Jr., of Harrisonville, Missouri was born October 17, 1941 in Osgood, Missouri the son of Glen Robert Sr. and Margaret Lorene (McLaughlin) Clark. He departed this life on Sunday, April 26, 2020 at the Cass Regional Medical Center, Harrisonville at the age of 78 years, 6 months and 9 days.

On April 9, 1966, Glen was united in marriage to Sharon Baker in Kansas City, Missouri.

Glen was employed at Kansas City Power and Light (KCP&L) as a Lineman and retired from there in 1996 after 33 years of service. It was a career he loved and spoke so highly of that he inspired four family members from the next two generations to follow in his footsteps. While working at KCP&L, he and Sharon opened up Clark’s Greenhouse where they sold countless plants for nearly 25 years. Glen and Sharon enjoyed traveling and after retirement they spent many winters in Arizona, Texas and Florida. They also enjoyed taking their grandkids on yearly trips. Camping was a favorite and for several years they were members of the Kansas City Airstream Club. He spent several years volunteering with Missouri Conservation where he shared his love for the outdoors with young children teaching them to fish. Glen also enjoyed gardening, hunting, playing cards and eating lunch with his friends at the Community Center.

Besides his parents, he was preceded in death by his wife of 52 years, Sharon Clark on October 1, 2018.


A private family graveside was held at the Clearfork Cemetery near Garden City, Missouri with Military Honors.

Family suggests memorial contributions may be made to the Harrisonville Senior Citizen's Center.

Funeral arrangements are under the direction of the Dickey Funeral Home, Harrisonville, Missouri.
To order memorial trees or send flowers to the family in memory of Glen Robert Clark Jr., please visit our flower store.