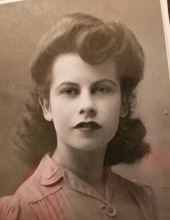 Greta May Sellmeyer of Cleveland, Missouri was born December 27, 1926 in Birch, Essex, England the daughter of Norman Frederick and Edith May Doris (Brewer) Wilgress-Miller. She departed this life on Sunday, June 3, 2018 at Cass Regional Medical Center, Harrisonville, Missouri at the age of 91 years, 5 months and 7 days.

On November 16, 1944, Greta married John Bernard Sellmeyer and moved to the United States to be with him following World War II.

Greta was a homemaker. She enjoyed being on the farm, raising cattle and gardening.

She was preceded in death by her parents, her husband, John on October 24, 1994 and her brother, Gordon Miller.

Graveside services were held Thursday, June 7, 2018 at the Gilliam Cemetery, Gilliam, Missouri.
To order memorial trees or send flowers to the family in memory of Greta May Sellmeyer, please visit our flower store.