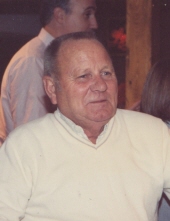 He was preceded in death by his parents, six siblings and two children, Wendy and Andy.

Hank was born April 3, 1929 and graduated from Southeast High School, KCMO, where he met and later married Joann Thomas on December 31, 1949. They remained married for 68 years. He was an Army veteran of the Korean war. He worked at KCPL for 38 years, retiring in 1991 as a lead lineman/cable splicer and member of IBEW #1464.

In retirement he enjoyed golfing, fishing, playing cards at the Rockin’ C, hosting fish fries and entertaining in his shed. He will always be remembered for his quick wit and sarcastic sense of humor, which he has passed on to his children. To know him was to love him.

The Barnett family would like to thank Dr. Sam Brewster at CRMC and Laci and April from Heartland Hospice for their amazing care, Jerald Dickey for his expertise and generosity. We couldn’t have done it without you. In lieu of flowers, the family suggests donations to Ronald McDonald House, 2525 Cherry St., Kansas City, MO 64108, or to any charity of your choice.