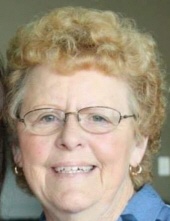 Helen Marie Brown, of Harrisonville, Missouri was born on November 27, 1941 in Dodson, Missouri the daughter of Roy James and Loeata May (Roper) Skivers. She went to be with her Lord and Savior, Jesus Christ, on Friday, July 5, 2019 surrounded by love and family at the Kansas City Hospice House at the age of 77 years, 7 months and 8 days.

On May 1, 1957, Helen was united in marriage to Paul Theron Brown in Ogden, Utah.

Helen was employed as a spot welder for General Motor Leed’s Plant until her retirement in 1983. She was a member of the First Baptist Church, Harrisonville, Missouri. Helen’s grandkids were her life and she supported them in all their activities. She had lived near Latour, Missouri before moving to Harrisonville in 1976.

Besides her parents, she was preceded in death by her husband Paul T. Brown on August 29, 2012; a son, Charles E. Brown; a grandson, Benjamin Brown; 7 brothers and 2 sisters.

Helen survived by her two sons, Paul T. Brown Jr. and Gary A. Brown and wife Dianna and a daughter, Genie M. Bylina and husband Edward all of Harrisonville, Missouri; 13 grandchildren; 23 great-grandchildren; a brother, Rudy Skivers, Peculiar, Missouri, a sister, Thelma Kennedy, Independence, Missouri; other relatives and many friends.

Family received friends Saturday, July 13, 2019 at the church.
To order memorial trees or send flowers to the family in memory of Helen M. Brown, please visit our flower store.