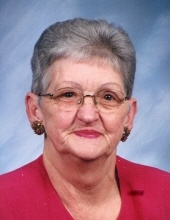 She was born at Eight Mile near Harrisonville, Missouri on April 4, 1930 to James William and Gladys Marie (Garrett) Lotspeich, the sixth of eight children. She moved with her family to Garden City, Missouri when she was 3 years old. She attended the Garden City Public Schools, graduating in 1948. On June 20, 1948 she married her High School sweetheart, Don Leroy Kenney, at the Garden City Baptist Church. They lived on the farm near Garden City and while there, 6 children were born to them. In April of 1967, they moved to their farm near Holden, Missouri. Helen accepted the Lord into her heart at the age of 8 and was a member of the Garden City Baptist Church. She faithfully served there in many areas and ways of ministry. She served as pianist and organist, there for 60 years. Helen and Don were blessed watching their 3 sons grow up. They were active in many sports and other activities and were excellent students and she enjoyed their accomplishments and their successful lives they have made for themselves and others.

Helen was a homemaker. She enjoyed their rose garden and many other flowers, the vegetable gardens they raised and where she canned and froze the produce. She often shared the flowers and produce and canned goods with others, it made her happy to be able to do that. Helen worked at Holden Manufacturing Co. for 12 years. She later worked at Sherwood Cass R-8 School in Creighton, Missouri for 8 1/2 years, where she enjoyed being the piano accompanist for the Middle and High School Choirs. Helen had a special love for music. She truly enjoyed the gift the Lord gave her and loved playing and sometimes singing music. She played for many weddings and funerals and other occasions. She gave piano and organ lessons for over 40 years. She was the accompanist for and a charter member of the Garden City Community Easter Cantata for 29 years and sang in it later. She accompanied the Holden Brass Band for 3 years. Helen loved her family very much. She enjoyed cooking for them and having them come and visit. They were her pride and joy. She was thankful to the Lord for all her blessings in life.