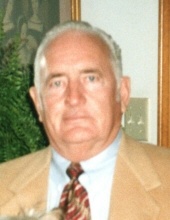 H.G., also known as Bill, was raised on the family farm north of East Lynne working alongside his parents and sister. He attended German town grade school and was a 1949 Pleasant Hill High School graduate.

At the age of 21 he joined the United States Air Force and proudly served for 4 years during the Korean War.

On November 11, 1953, he was united in marriage to Norma V. Santacruz in Tucson, Arizona, and to this union three daughters were born. They later divorced and she preceded him in death on February 13, 2007.

Bill was employed as a Fireman Inspector for T.W.A over haul base for 30 years. He also owned and operated a small lawn care business on the side. He was a hard worker always keeping his home and himself clean and neat. He enjoyed collecting airplane memorabilia and Marilyn Monroe pictures, and he was an avid reader. He loved taking cruises and traveling internationally.

Bill was also preceded in death by his parents; one daughter Carla Marie Boyle; one sister, Margie Yoder; and a special friend, Ruth Ward.

He is survived by two daughters, Natalie (and Anthony Honeycutt) Bartch of Stonewall, Louisiana, and Joan (and Bernard) Matthey of Tucson, Arizona; eleven grandchildren; four great grandchildren; one sister, Ginger (and Jim) Holt of Harrisonville; several nieces and nephews; other relatives and friends.

Memorial contributions are suggested to Cass County on Aging or Wayside Waifs and may be sent in care of the funeral home.