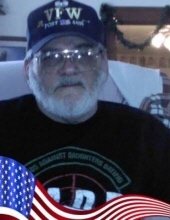 Herbert Andrew “Andy” Wilhelm, of Garden City, Missouri was born February 9, 1948 in California, Missouri the son of Herbert Henry and Anna Marie (Allee) Wilhelm. He departed this life on Wednesday, February 19, 2020 at his home at the age of 72 years.

On May 12, 1977, Andy was united in marriage to Carolyn Ailene Williams in Lee’s Summit, Missouri.

Andy grew up in Kansas City, Missouri where he attended Raytown High School, he left school early so he could join the United States Army and was a veteran of the Vietnam War. He was honorable discharged and received two bronze stars, a purple heart and several other medals. Andy was a member of the Harrisonville VFW Post #4409, Harrisonville, Missouri. After the military, he was employed as a diesel mechanic for Freightliner in Kansas City, Kansas and later with Limpus Quarries in Harrisonville, Missouri. Andy enjoyed fishing, hunting, being in the outdoors and most of all spending time with his grandchildren and great grandchildren.

Besides his parents, he was preceded in death by two sisters, Ruth Ann Land and Melinda Ramsell and a brother, Lanny Wilhelm.

Cremation with a private family service held at a later date.

Arrangements are under the direction of the Dickey Funeral Home, Garden City, Missouri.
To order memorial trees or send flowers to the family in memory of Herbert A. "Andy Wilhelm, please visit our flower store.