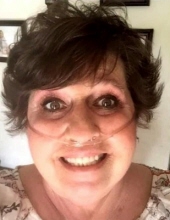 Holly Renee Miles was born March 19, 1963 in Kansas City, KS to David McCune and Joy Stoll.
Holly was the second of 4 girls. Her childhood was spent at the Lake of the Ozarks before
relocating to the Grandview area.

She graduated from Ruskin High School in 1981, working at a local gas station while attending
cosmetology school to later become a hairdresser. While working at the gas station, she met her
future husband, James (Jim) Miles. They were married at the Jackson County Courthouse on
July 22, 1982. Holly went to work as a hairdresser at JC Penney shortly after their marriage,
with Jim working as an over the road truck driver.

Together they were blessed with 3 children: Jennifer Ann in 1983, James Edward Jr. (Jimmy) in
1985, and David Emanuel in 1986 who passed from SIDS as an infant. The family lived in
Anthony, KS, Grandview, and Peculiar before settling in Garden City, MO in 1993.
In Garden City, she became the neighborhood mama to all. Her door was always open, as were
the snack cabinets. She was always willing to offer up a ride, an ear to listen, or a hug to any
child in need.

She went to work at the Sherwood School District in the cafeteria, before accepting a position at
Casco Area Workshop where she eventually became the Marketing and Production Manager.
Holly thrived at her position for over a decade until her health forced her to retire in 2003.
In May 2005, she was delighted with the births of her first granddaughter, Mia, and grandson,
Emanuel. In the coming years, she became Granny to 6 more grandchildren: Jadyn, Jonis, Lilly,
Marlee, Noah, Miles, and Delilah. Holly loved children, but her grandbabies were truly the
biggest joy in life. She loved to spoil the grandkids rotten, and lived for their visits.

Holly was also a dedicated member of the Garden City community. Throughout the years, she
was an officer for the Garden City Ball Association, Beta Sigma Phi sorority, the Garden City
Fall Festival Committee, an administrator for the Sherwood Community News & Views
webpage, a sports coach, room mom, PTO member, scout leader, and many other activities to
benefit the place she called home. She was a trusted source of information, and always willing
to donate to anyone’s fundraiser under the condition that it benefit the Sherwood community.
In her later years, her health prevented her from traveling much further than doctor’s
appointments and the homes of her family members. She never lost her positive outlook on life,
continuing to inspire others throughout battles with breast cancer, numerous bouts with
pneumonia, and most recently, COVID. She was open about her health struggles, hoping that
her stories would help someone else coping with similar problems.

She passed away Tuesday, July 20, 2021 at KU Health Center in Kansas City, KS - the same
hospital where she was born. She took her final breaths surrounded by family with the love of
her life, Jim, holding her hand as she left this world for her next adventure.

She was preceded in death by her son David, father David McCune, sister Angela Stewart, and
her grandparents.

Holly was a champion for children in the Sherwood Community. The family suggests
contributions be made to the Sherwood PTO in her name.

A Celebration of Life Visitation will be held Wednesday, July 28, 2021 from 6:00 p.m. - 7:30 p.m. at the Heart of Life Church, Garden City, Missouri.
To order memorial trees or send flowers to the family in memory of Holly Renee Miles, please visit our flower store.