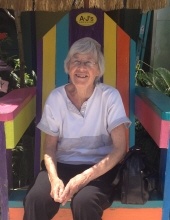 Iona Faye Jenkins (Ice) 79, of Garden City, Missouri, was born December 27, 1939, in Houston, Missouri, to Harlin and Sylvia (Irene) Ice (Smith). Iona departed this life early in the early morning of September 14, 2019, surrounded by her family in her home.

She was united in marriage to Jerrold (Jerry) Jenkins on April 14, 1962. They were married for 56 years until his passing in February of 2018.

Iona worked tirelessly side by side with Jerry raising a family and as a partner in their farm Winsome Losesome Acres. She loved being outside on the farm and working in the yard and garden. She enjoyed antiques and refinishing furniture with meticulous care and detail for many people. Her home was filled with love and many handcrafted items and pieces of furniture from the family.

She was a devoted Mother, Grandmother, and Great Grandmother. Her family and friends were the most important to her and the many visits to her house meant so much.

Iona was preceded in death by her husband Jerry, her parents, and one brother, Paul Ice. She is survived by son Brian and wife Dee of Greenville, SC; daughter Jana and husband Jake of Creighton, MO; son Timothy and wife Diane of Greensboro, NC; grandsons Chase, Tyler, and Preston Linder; great-grandson Arlo, and other family, wonderful neighbors, and many friends.

The family received friends Tuesday, September 17, 2019 at the funeral home.

Family suggests memorial contributions may be made to Serenity Care Hospice.
To order memorial trees or send flowers to the family in memory of Iona F. Jenkins, please visit our flower store.