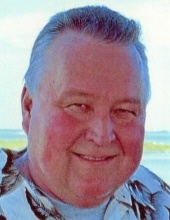 Jim was a 1983 Pleasant Hill High School graduate. After high school he attended Penn Valley Community College where he graduated from the Police Academy.

On March 11, 1993, he was united in marriage to Una Theresa Conroy in Independence, Missouri.

Jim had previously been employed as a Police Officer for the cities of Lee’s Summit and Greenwood. He was currently the C-Store Manager for the Hy-Vee Filling Station in Raytown, Missouri, where he developed countless lifelong friendships. He enjoyed Dog Racing at Derby Lane in St. Petersburg, Florida, cooking, a long walk on Madeira Beach, and attending Chiefs games with his sons. He most cherished time spent with his children and grandchildren, especially time with Adonis and Lily.

Jim was preceded in death by his paternal grandfather, Walter Matthes; maternal grandparents Perry and Leona Riddle; and one nephew, Travis Kanies.

Funeral services will be held 10:00 a.m. Friday, June 18, 2021, at the Stanley-Dickey Funeral Home, Pleasant Hill, Missouri. Reverend Mark Conway will officiate. Interment will be in the Pleasant Hill Cemetery.

Visitation will be held 9:00 a.m. until service time.