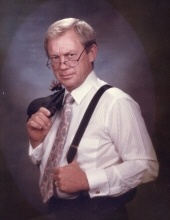 Born Feb. 26, 1936, James Allen, to Lawrence A. and Carrie R. (Zook) Schrock, the second of 6 children.
Early childhood was on the family farm N.W. of Garden City. Great memories of home and extended family both Mom’s and Dad’s, ---many cousins, uncles and aunts that we saw every week at church and often during the week.
Grade school at No. 9, and 3 Godly teachers that poured into us; Miss Mary Katheryn (Yoder), Miss Mary Eleanor (Miller), and Mr. (Al) Yoder.
Harrisonville High 3 years, where music began to come to the fore, then on to Hesston.Two great years at Hesston, lots of music instruction and singing. As both 12th and 13th grader, had the privilege of doing the bass solo work in the school’s annual presentations of Handel’s Oratorio, “Messiah.”
After a disappointing semester at Goshen College, I left Indiana to fulfill my military two year obligation in Alternative Service as a ward orderly in a psychiatric hospital in Topeka, Ks. Remained in Topeka until completing a Bachelor of Music degree from Washburn University, graduating a “Whiting Scholar” in 1959.
Returned to Cass County for breathing room, decided against further education.Elected instead for business, and with Dad’s money bought the R. I. Zook Elevator in East Lynne.
After a 3 year friendship, Jim and Carol Kay Firestone were married June 11, 1960, at Grace Cathedral, Topeka. And moved to East Lynne! Quite an adjustment for a city girl and a boy gone for 7 years.Life settled in, Kay began fall teaching in Latour and work began on the East Lynne Elevator, converting it to an all grain buying point, feed mill, pelleting operation, and full molasses service facility. Mention must be made of Gene O’Bannon, with me from the first day ‘till the last, who kept things humming and in order.
We had moved into a cute, older 4 room, 2 bedroom house adjacent to the mill, and there our three sons were born. Nothing enhanced my life like our children. First was Mitchell with those big, brown eyes and a willing spirit, then Kelly, always inquisitive, always inventing; finally, Brian, sure to be the life of the bunch.
The Lord financially blessed our work at the Elevator, and when a qualified buyer presented himself, we sold it. Not yet 30 years old, I was feeling used up and ready for what came next.
We stayed in the East Lynne house until ’72 and by then a new house was ready. My efforts turned to farming, and Kay had moved from Latour School to East Lynne, and was transitioning to the Harrisonville Christian School. Our church home was now at Harrisonville Mennonite Church. There we found enthusiastic support for the great hymns of the Church. At Pastor Hal Perkin’s suggestion a choir was formed; full four parts and faithful in Thursday night rehearsals and Sunday morning services. I loved that choir and the way they dug into the work. No other group I’ve directed holds that place in my heart. Almost without warning, the music program collapsed. I quit attending there, the choir disbanded; the music program took a complete turn. Kay’s and my marriage ended, and I went into a 2 year desert experience. Golf every Sunday, but there was always that Thumb in my back that took the joyout of it. Until that Sunday in mid-October, on the tee box of the 7th hole, just as I teed up, the 10:30 church bell over the hill began to ring. I looked at Sue and asked “you know what that means,” and she silently agreed. We played thru and never went back.
Sue and I began attending services at the little Disciples Church in Garden City. A small group, where we were loved and needed. We were married in November, 1987 and moved to the “Adams” place, one of our farms near Gunn City. Mitch took over the business of the farms in 2000 and I continued on as a worker. This gave me freedom to become a member of the William Baker Festival Singers in 2004. The Singers is a highly auditioned, semiprofessional group of 48 mixed voices, singing mostly acapella sacred music of the Church. A much disciplined group singing difficult repertoire. After 44 years an opportunity to sing again! The depth of some of those works touched and healed my spirit where it needed it most. My forever thanks to Dr. Baker and the other 47 Singers, and the 10 years I sang with them!
Sue’s and my life has been pretty low profile. She started school in ’96 and completed her graduating degree with Masters in Education. Then followed that with a 14 year teaching career. And now does volunteer work at the Church 2 days a week. Summers we frequently enjoy a weekend at Pomme in the camper, often with some of the children. Our 32 years have flown by so quickly, but have provided us with opportunity to make real spiritual growth through ministries and other studies. Family is all nearby, and with friends and Church family, we have been surrounded with love and caring.

Besides his parents, he was preceded in death by a grandson, Jonathan Schrock; a great-granddaughter, Rylee Woolery and 3 sisters.

Family suggests memorial contributions may be made to William Baker Choral Foundation.
To order memorial trees or send flowers to the family in memory of James "Jim" A. Schrock, please visit our flower store.