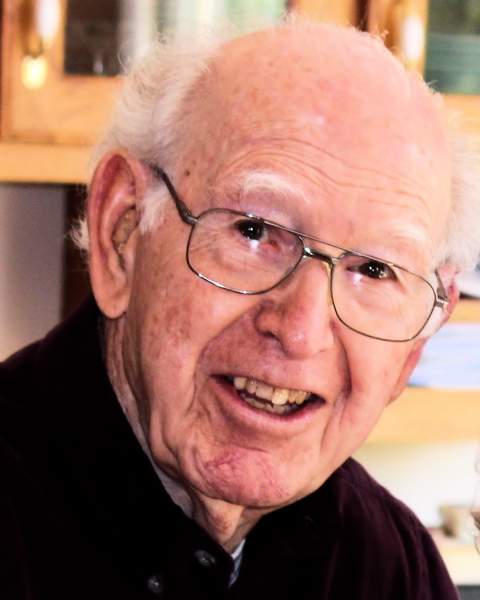 Jim was born on February 26, 1927, the second of four children, in Hillsdale, Kansas to James W. and Gertrude (Jennings) Fannan.  On June 23, 1947, Jim married Mildred M. Smith in Olathe, Kansas, they were happily married for over 71 years until Millie’s passing.  Jim and Millie raised their family in Freeman, MO and then retired to Harrisonville, MO in 1993.  In 2016, they moved to Cedar Lake Village.

When Jim was a senior in high school he enlisted in the Coast Guard, completed basic training, and returned to receive his high school diploma.  After graduation he was assigned to the USS Cambria as a Fireman First Class.  He and his shipmates were the first to arrive in Nagasaki Harbor after the atomic bomb was dropped.  Additionally, his ship was anchored next to the USS Missouri in Tokyo Bay during the signing of the Japanese surrender.

After marriage, Jim and Millie traveled around the Midwest and South living in dozens of towns in 11 states while Jim was pipelining.  As their family began to grow, they decided to put down roots and settled in Freeman.  Jim took a job at the Bendix Corporation in Kansas City where he enjoyed a 35-year career, retiring in 1992.

He was a loving father who supported his children in their sports, scouting and academic activities.  Jim was also an avid sports fan who loved the Chiefs, Royals, Jayhawks, and Midway Vikings.

Jim was preceded in death by his wife Millie (September 20, 2018), his parents, sister Jannet Clark, half-sister Mildred DeMastus and a step-grandson Christopher Fannan.

All his family loved him dearly and he will be deeply missed by them and his many friends.

Funeral service will be held 2:00 p.m., Saturday, September 17, 2022 at the Dickey Funeral Home, Harrisonville, Missouri.  Burial will be in the Freeman Cemetery, Freeman, Missouri with Military Honors.

The family suggests anyone wishing to donate in Jim’s memory may contribute to the Olathe Health Hospice House.

To order memorial trees or send flowers to the family in memory of James "Jim" M. Fannan, please visit our flower store.