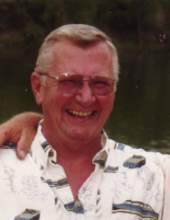 James “Jim” Robert O’Connor, of Garden City, Missouri was born on November 30, 1939 (Thanksgiving Day) in Omaha, Nebraska the son of Leo and Gertrude (Carter) O’Connor. He departed this life on Tuesday, July 2, 2019 at Carnegie Village Rehab and Health Center, Belton, Missouri at the age of 79 years, 7 months and 2 days.

Jim was a business man throughout his entire life. He worked for Seldin Corporation in Omaha, Nebraska as General Manager of the Restaurant Division. From there, he developed and operated a chain of pizza restaurants, The Pizza Keg in Nebraska and Pucci’s Pizza in Iowa, which his friends and family will fondly remember forever. At The Pizza Keg Restaurants, Jim made it MANDATORY company policy that all kids get a free toy. During this time he also started several movie rental stores in Nebraska and Iowa known as Movie Center. He later worked for PepsiCo as an area manager in Kansas City until the late 1990’s where he managed Seven Stop for Gene and Beulah Buerge in Garden City, Missouri. He later purchased the store and had operated it with great joy until his passing. Jim was a person that loved his work, but more important to him, he loved those around him. He loved his family, his friends, his employees, customers, associates, and even those who gave him grief.

Besides his parents, he was preceded in death by a daughter, Deborah O’Connor and a brother, Richard O’Connor.

Funeral services were held Monday, July 8, 2019 at the Dickey Funeral Home, Harrisonville, Missouri with burial in the Orient Cemetery, Harrisonville.
To order memorial trees or send flowers to the family in memory of James "Jim" Robert O'Connor, please visit our flower store.