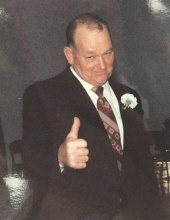 James "Jim" Robert Riffle, Sr., 83, Latour, Missouri was born July 10, 1937. The son of Frederick Thomas and Glada Elizabeth (Plank) Riffle. He departed this life April 2, 2021 at KU Medical Center surrounded by his loving family at the age of 83 years, 8 months and 23 days.

Besides his parents, he was preceded in death by his son Bob in 1996, two brothers Raymond Riffle and John Riffle and his wife Barbara, and his brother-in-law Bill Davis.

He grew up on a farm near Quick City, Missouri with his 6 brothers and sisters. Jim graduated from Latour High School in 1955 then went to work for Stahls Specialty in Kingsville, Missouri where he worked for several years. He would work all day at Stahls and would farm before and after work but always came home with something in his lunch box for the kids to share.

He always called the family on their birthday to sing tp them. He spanned the generations with his generosity and love. He always had a joke to tell you and a friendly ear to hear your happy stories or your problems and tried to give you good advice. Even in his last hours, he was telling jokes to the doctors and nurses and telling them how much he appreciated them and for the good care he was getting and that he loved them all.

When Jim was made they broke the mold. He was a pillar of strength and love to all of us, and always made time for anyone who needed him.

The family suggest that memorial contributions may be made to the Jim Riffle Memorial Fund and may be sent in care of The Dickey Funeral Home, P.O. Box 432, Harrisonville, Missouri 64701.
To order memorial trees or send flowers to the family in memory of James "Jim" Robert Riffle, Sr., please visit our flower store.