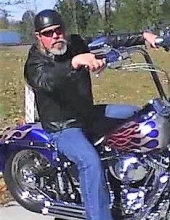 He attended Williamson High School in Freemont. Following graduation and after extensive training he became a skilled Millwright and proud member of Union Local #1529. He enjoyed collecting and riding Harley Davidson Motorcycles. He was a hard worker and would give the shirt off of his back to help someone; most importantly he loved his family.

Jim was preceded in death by mother Cathy.

He is survived by his daughter and son-in-law, Azlynn and Justin Stacy of Peculiar, Missouri; his son and daughter-in-law, James and Amanda Peterson of Denver, Colorado; two grandchildren, Brecklynn Stacy and Caden Stacy, both of Peculiar; three siblings, Kimberly Andrews of Herriman, Utah, Christine (and Floyd) Dugger of Roy, Washington; and Michael (and Stacy) Peterson of Lee’s Summit, Missouri; several cousins, nieces, and nephews; other relatives and friends.

Per Jim’s wishes cremation has been accorded. A celebration of his life gathering will be held at a later date.

Memorial contributions are suggested to the Saint Luke’s Hospice House or Three River’s Hospice, St. Joseph, and may be sent in care of the funeral home.

Online condolences may be sent to the family at www.stanleydickeyfuneral home.com