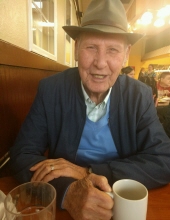 James Richard Glaze, of Harrisonville, Missouri was born July 14, 1929 in Lamar, Missouri the son of John and Roselee (Feezell) Glaze. He departed this life on Monday, September 24, 2018 at Lee's Summit Medical Center, Lee's Summit, Missouri surrounded by love and family at the age of 89 years, 2 months and 10 days.

James was employed as a maintenance supervisor for Sawyer of Napa Tannery, Napa, California. He was a member of the Abiding Love Baptist Church, Harrisonville. James was an Army veteran and was very active with the Harrisonville VFW Post #4409 Honor Guard. He enjoyed fishing, going to the casino, going to auctions, playing bingo, taking trips and driving to get there.

Besides his parents, he was preceded in the death by a daughter, Gwen Yeager and two brothers, Willard and Jack Glaze.

Inurnment is in the Missouri Veterans Cemetery, Higginsville, Missouri at a later date.

Funeral arrangements are under the direction of the Dickey Funeral Home, Harrisonville, Missouri.
To order memorial trees or send flowers to the family in memory of James R. Glaze, please visit our flower store.