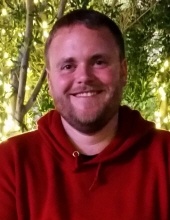 Jared was born at St. Joseph hospital in Kansas City, Missouri. He grew up in Lee’s Summit, Missouri attending their schools and graduating from Lee’s Summit High School in 2005. He started working for County Beverage in Lee’s Summit in 2005, leaving there as a driver in 2012 to drive for his current employer, US Foods.

Jared is survived by his wife, Jennifer; his mother, Dianna Campbell (Dave); his father, Jim Fizer; his brother Clint Fizer (Sarah); his nephew Jacob, and niece, Ava Jane. He leaves behind many aunts, uncles, cousins, and friends.

From the time that he could walk, he was constantly following his brother Clint. If Clint rode his bike, so would Jared. He followed his brother’s footsteps, playing football and throwing in track and field. They were always into mischief; bringing home a bucket of frogs from the pond, boiling a deer head in the driveway, sneaking off driving when neither had a license and there was always the big time wrestling that took place on the living room floor. They loved fishing, hunting, and just hanging out together.

Jared told the story of when he first saw Jennifer. She was working at Tractor Supply. He knew he had to meet her. Their first date, a double date, they barely spoke two words to each other. No one thought there was going to be another, but luckily Jennifer liked his truck. After one of their dates, he came home and Jennifer had cooked for him. He said, “Mom, she cooks just like you.” He was so happy and had found his love.

While Jared and Jennifer were not blessed with children, he loved playing and hanging out with his buddy’s kids. This is totally expected because Jared was a big kid at heart himself.

He loved to get together with his nephew, Jacob. Every year at Christmas there would be “Nerf wars.” His niece, Ava Jane, was born this year, four days after Jared’s birthday. Even though COVID made it difficult, he was able to meet her on several occasions, getting to hold and spend time with her.

When they moved to Harrisonville, he was surrounded by his extended family. Friend is not a strong enough word to use when it came to his relationship with all of them. His buddies were his other brothers. They laughed, partied, worked, ate, traveled, vacationed, and lived everyday together.

Jared and his brothers were always tinkering with something. He loved helping with the farming, bailing hay, fixing broken equipment, cooking for parties, staying up all night smoking Thanksgiving turkeys and anything else anyone needed. He was always there to help.

Jared was always up for a good time. The first to arrive and the last to leave, he was the life of the party. His smile and laugh were infectious, and you always had a good time in his presence.

Jared was a cook and he loved to cook for Jennifer, his friends and family. He liked to grill and smoke meat, something he learned from his dad, Jim, at an early age. When cooking in the kitchen, he would call his mom, Dianna, and ask for recipes. He would make it, but he always added a pinch of this or a shake of that to put the Jared twist on it.

He enjoyed hunting the “elusive” morel mushroom with his stepdad, Dave, every spring. If there were worms to drown, the two would pick up their poles in competition for the ever-coveted Trifecta; first fish, biggest fish, most fish. They usually returned after hours with no worms and no fish, but a lot of great stories about the ones that got away.

He was kind, loving, giving, deeply loyal and would greet you with a smile. Jared never met a stranger. If you were fortunate enough to know Jared, your life is forever enriched. He was a loving husband, son, brother, uncle, and friend. Our hearts are broken, and the huge hole left can now only be filled with all the amazing memories we have. You are so loved and will be remembered forever. Rest in peace, my love.

Funeral services will be 12:00 p.m., Saturday, November 21, 2020 at the Heart of Life Church, Garden City, Missouri with burial in the Wills Cemetery, Peculiar, Missouri.

Family suggests memorial contributions may be made to the Jared Fizer Memorial Fund. Please make checks payable to Jennifer Fizer.

Funeral arrangements are under the direction of the Dickey Funeral Home, Harrisonville, Missouri.
To order memorial trees or send flowers to the family in memory of Jared M. Fizer, please visit our flower store.