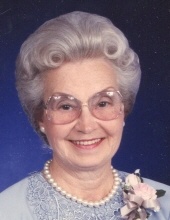 Jaunita B Wesemann of Harrisonville, Missouri was born December 7, 1921 in Garden City, Missouri the daughter of Edwin Fred and Florence L. (Long) McGraw. She departed this life on Wednesday, January 8, 2020 at the Crown Care Center, Harrisonville at the age of 98 years, 1 month and 1 day.

On September 20, 1939, Jaunita was united in marriage to George Francis Wesemann in Butler, Missouri.

Jaunita was a homemaker. She attended the United Methodist Church in Harrisonville, Missouri and was a member of the Order of Eastern Star 215 Ivy Leaf Chapter, Pleasant Hill, Missouri. Jaunita enjoyed sewing, quilting, fishing and growing a garden.

Besides her parents, she was preceded in death by her husband George Wesemann; a brother, Edwin Fred McGraw Jr.; two sisters, Bonnie Lee McWilliams and Barbara Lucille Denton.

Cremation. A private family service will be held at a later date at Crescent Hill Cemetery near Adrian, Missouri.

Funeral arrangements are under the direction of the Dickey Funeral Home, Harrisonville, MO
To order memorial trees or send flowers to the family in memory of Jaunita B Wesemann, please visit our flower store.