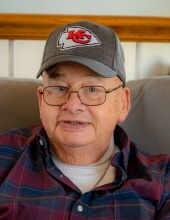 Jay Lynn “Butch” Patterson, of Belton, formerly of Harrisonville, Missouri, passed away Tuesday, April 20, 2021, at his home. He was 74.

Jay was born October 8, 1946, in Harrisonville, Missouri, the son of Max O’Neil and Lillian Natilee (Cox) Patterson. His early childhood was spent on the family farm near Harrisonville, where he and his only sibling, Glenna Sue, helped with the dairy business started by their parents and grandparents. He attended Hutchinson School through the eighth grade and the Daugherty Methodist Church.

After the family moved “in town” to Harrisonville, Jay attended Harrisonville High School and graduated in the spring of 1964. Beginning in his freshman year Jay participated in a variety of extra-curricular activities. During high school, he served as treasurer of the freshman class; president of his senior class; president of the letterman’s club; and president of the 4-H club. He enjoyed participating in school plays, speech contests, including the American Legion oratory contest, and music with a double quartet. In the summer between his junior and senior year, Jay was selected as a delegate to Missouri Boy’s State and attended in the summer of 1963.

However, Jay’s biggest enjoyment throughout his life was sports. As a student athlete, Jay played and lettered in football and track and served as the boy’s high school basketball manager. The Kansas City Star appointed him as a student-correspondent for Harrisonville High School and his reporting was often featured in the newspaper highlighting Harrisonville teams. Always industrious, Jay worked with his father first at the Standard Oil gas station his parents owned and then at Sunnyside Dairy running milk routes to deliver Borden milk to both residents and businesses in Cass County.

Following his graduation from high school, Jay was accepted to the University of Missouri-Columbia, but elected to attend Central Missouri State University, now UCM, in Warrensburg, Missouri. While at UCM, he studied business administration and industrial management.
His winning personality and easy-going charm made him a natural at sales. He loved the transportation business and worked as a sales manager for several large trucking firms throughout Kansas City and the Midwest where he excelled at developing customer accounts and managing trucking terminal operations. He was active in the Traffic and Transportation Club of Kansas City where he was later elevated to president of the Board of Directors.

In January of 1982, he married Diane Curry of North Kansas City. Diane and her three children, along with his son Darren Patterson, created a warm and loving family unit that enjoyed many adventures together. Jay and Diane renewed their vows in 1998, at the Harrisonville United Methodist church with their entire blended family serving as the wedding party.

Jay was a devoted Christian and an active member of the United Methodist Church. He attended Sunday school regularly and often taught classes as his health allowed. He loved to attend Harrisonville High School football games with his dear friends retired pastors Udell Wolf and George Moore. He would often drive the trio to away games, each with hat in hand as there was nary a hair on any head!

As a young man, Jay excelled at bowling. He and his teammates were often hard to beat on league nights and Jay recorded one perfect 300 game. During his young adulthood, Jay loved to serve as a referee for high school football games and did so until he married and started a family. He was an avid reader and in his retirement enjoyed growing good Missouri tomatoes.

A kind and generous soul, Jay was cherished by both family and friends. He loved to tease and torment those he loved and always enjoyed a good joke or well-timed quip. His mischievous grin and sense of humor will be greatly missed by all who knew him.
Jay was preceded in death by his parents.

Funeral services will be Monday, April 26, 2021, at 2 p.m. at the Harrisonville United Methodist Church with burial in the Orient Cemetery, Harrisonville.

In honor of Jay’s lifelong love of sports, attendees are encouraged to wear attire supporting their favorite team.

Funeral arrangements are under the direction of the Dickey Funeral Home, Harrisonville, Missouri.
To order memorial trees or send flowers to the family in memory of Jay Lynn Patterson, please visit our flower store.