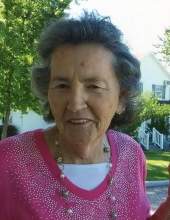 Daisy Jean Agnes (Bricker) Collins was born in her grandparents’ home in East Lynne, Missouri on October 17, 1934, the daughter of Roy C. Bricker and Viola V. (Moore) Bricker. She peacefully passed away in her son-in-law & daughter’s home in Garden City on February 15, 2022.

On June 10, 1951, she married Cecil Collins of Gainesville, Missouri. Together they raised six children and lived in several different states and cities. In 2002 they celebrated 51 years of marriage.

Jean married at a young age and lived her life as wife, home maker and dedicated mother. She took great joy raising her children and being Grandma to 32 grandchildren, 39 great grandchildren and 3 great, great grandchildren. She gave her heart to Jesus at an early age. She taught bible studies and spent many hours in prayer for her family. She was “Mrs. Clean,” a hard worker, creative and quiet. She loved movies, music, sewing, ice cream, donuts, hamburgers, and more ice cream.

She was preceded in death by her husband Cecil, in 2002; two granddaughters; Janelle N. Rappisi and Deborah J. Raduenz.

Cremation. A Celebration of Life Service will be held at a later date with inurnment in the Austin Cemetery near Archie, Missouri.

Family suggests memorial contributions may be made to the
Worldwide Christian Aid
4504 Skyline Ct.
Albuquerque, NM 87111
Please note AMAZON in the memo

Funeral arrangements are under the direction of the Dickey Funeral Home, Harrisonville, Missouri.
To order memorial trees or send flowers to the family in memory of Jean Collins, please visit our flower store.