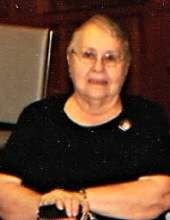 Jerry Lea Miller, of Grain Valley, Missouri was born July 12, 1939 in Olathe, Colorado the daughter of Jerry Ralph and Opal Lea (Smith) Cook. She departed this life on Tuesday, January 25, 2022 at St. Luke’s East Hospital, Lee’s Summit, Missouri at the age of 82 years, 6 months and 13 days.

Besides her parents, she was preceded in death by her first husband, Chester in April of 1977; her second husband, Walter in February of 2001; two sons, Gary Shriver in September of 2010 and Tommy Shriver in February of 1979; a step-son, Butch Miller in July of 2017, and her older sister, Rosa Collins in March of 2020.

NOTE TIME CHANGE -
Services for Jerry Lea Miller will be held Saturday, February 12th, 2022 at Nagle Christian Church. The service will be held at 12:00 pm with a potluck lunch and fellowship to follow. Masks are optional.

The family will provide the main portion of the meal and ask that you bring a side dish, or a desert, tea, water and coffee will be provided.

The family would like to hear your memories of or with Jerry, please bring a memory written or paper will be provided to write your memory. If you have pictures that you are willing to share and show of Jerry, the family asks that you bring them for all to look through.

In lieu of flowers, please make donations to Nagle Church.
To order memorial trees or send flowers to the family in memory of Jerry Lea Miller , please visit our flower store.