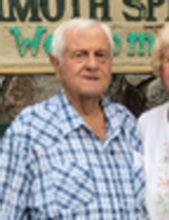 Jerry Patrick Daniel, of Creighton, Missouri was born September 29, 1942 in San Diego, California the son of Jerrold Amon and Pearl Edna (McCall) Daniel. He departed this life on Sunday, May 24, 2020 at his home near Creighton at the age of 77 years, 7 months and 25 days.

On March 20, 1967, Jerry was united in marriage to Lora Lee Tuttle in Springfield, Missouri.

Jerry was employed as a control operator for Kansas City Power and Light from November 15, 1971 until his retirement on January 31, 2004. He was a member of the Creighton Christian Church, a member of the Belton-Grandview Masonic Lodge #450 A.F. & A.M. and was a Scottish Rite of Freemasonry, Kansas City, Missouri. Jerry loved to hunt, fish and do wood carvings. He enjoyed tying flies for fishing, working and being on his farm.

Besides his parents, he was preceded in death by an infant sister.

Cremation. A Celebration of Life Graveside was held Saturday, May 30, 2020 at the Byler Cemetery near Creighton, Missouri.

Funeral arrangements are under the direction of the Dickey Funeral Home, Harrisonville, Missouri.
To order memorial trees or send flowers to the family in memory of Jerry P. Daniel, please visit our flower store.