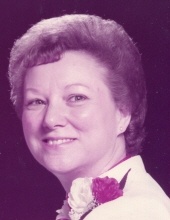 Iva Joan Cox, of East Lynne, Missouri, was born May 23, 1936 in Carthage, Missouri the daughter of Purl Buster and Julia Gladys (Harrill) Pennington. She departed this life on Wednesday, July 8, 2020 at her home surrounded by love and family at the age of 84 years, 1 month and 15 days.

On January 20, 1984, Joan was united in marriage to Robert Lowell Cox in Kansas City, Missouri.

Joan was a real estate broker and owned Hoover Realty, Kansas City, Missouri and later was an accountant for the City of Kansas City in the water department until her retirement 1993. After her retirement, she was an Assistant to the Director of Financial Services at the Metropolitan Community College from 1994-1998. From 2000-2002, Joan was the East Lynne City Treasurer, volunteered for beautification of the East Lynne Rodeo Park and helped produce the weekly bulletin for the East Lynne Assembly of God Church. Joan loved to sew, plant and grow a flower garden, write stories and poetry. Joan had a deep abiding love and trust in Jesus Christ, her Savior. She was known as a graceful lady who was very witty and humorous.

Besides her parents, she was preceded in death by two sisters and a brother.

Family suggests memorial contributions may be made to the Heartland Hospice in Butler, Missouri.
To order memorial trees or send flowers to the family in memory of Joan Cox, please visit our flower store.