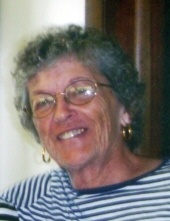 Helen Joan Hammond, of Harrisonville, Missouri was born May 16, 1933 near Warrensburg, Missouri the daughter of Jim and Mary (Cunningham) Brookshier. She departed this life on Tuesday, June 4, 2019 at the Golden Years Care Services, Harrisonville surrounded by love and family at the age of 86 years and 19 days.

On October 27, 1956, Joan was united in marriage to Thomas Edwin Hammond in Centerview, Missouri.

Joan was a homemaker. She was an active member of the Harrisonville United Methodist Church where she started the 3 year old Sunday School Class and was picked to be the Sr. High Youth Leaders in the 1970’s. Joan was active in Harrisonville Arts and Crafts clubs and helped with the club’s annual Christmas Store. She enjoyed making dolls, stuffed toys and animals. Joan sold dolls to Silver Dollar City for several years and her living room floor would be covered in dolls when she was getting them ready to pack for delivery or attend craft shows. Tom and Joan regularly attended auctions, sold vintage and collectibles in various flea markets in the area and enjoyed going to the Westline Music Show.

Besides her parents, she was preceded in death by her daughter, Cindy Meyer on February 5, 2016 and two cousins, Bob and Clyde Brookshier.


Cremation. A Celebration of Life Service was held Wednesday, June 12, 2019 at the United Methodist Church, Harrisonville.

Family suggests memorial contributions may be made to the United Methodist Church Youth Program.

Funeral arrangements are under the direction of the Dickey Funeral Home, Harrisonville, Missouri.
To order memorial trees or send flowers to the family in memory of Joan Hammond, please visit our flower store.