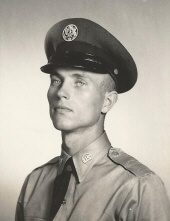 John Edward Beckerdite of Raymore, Missouri was born December 2, 1930, the son of John Quincy and Naomi Beckerdite, in Main City, MO. As he was surrounded by family members on September 1, 2020, God called him home and he went to be with his Lord and Savior.

On July 5, 1952, John married his sweetheart, Mary Alice Welborn, at First Baptist Church of Harrisonville, MO. They shared a love of music and the Lord. John sang in the choir, a men’s quartet, and led the singing in many revival services while Mary Alice accompanied on the piano.

John served in the Air Force and was based at McConnell Air Force Base during their early marriage. After leaving the Air Force, he and his father farmed 500 acres of land. After farming for years, John and his wife took a step of faith and started a new business, Mary-Ed Eggs, beginning with 3,000 laying hens and expanding to 21,000 hens. They processed and delivered eggs for more than 20 years alongside their four children. After retiring, they moved to western Colorado for 11 ½ years, before returning to Missouri in 2000 to be near their children.

Besides his parents, John was preceded in death by his brother, Robert J. Beckerdite and his sister, Norma Short.

Cremation. A Memorial Graveside with Military Honors will be held at the Freeman Cemetery, Freeman, Missouri at a later date.

Funeral arrangements are under the direction of the Dickey Funeral Home, Harrisonville, Missouri.
To order memorial trees or send flowers to the family in memory of John Ed Beckerdite, please visit our flower store.