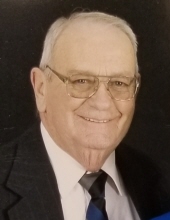 John Edgar Everhart, 79, Overland Park, Kansas departed this life on Tuesday, November 26, 2019 at Menorah Medical Center, Overland Park, KS. John was born on July 31, 1940 to George and Beulah (Stoner) Everhart in Butler, MO. In 1959, he graduated from Butler High School. Following graduation, he spent the next thirteen years working for General Motors. He then became a district sales manager for Prudential Insurance until his retirement.

During his retirement, John became an excellent wood worker and avid fisherman. He and his wife Nancy spent many years living on the lake in Camdenton, MO. John enjoyed meeting other fishermen and sharing stories. But he made sure to never share his favorite fishing spots. He also enjoyed building and flying model airplanes with his friend Fred.

John is survived by his wife Nancy, his children and grandchildren. John was preceded in death by his parents George and Beulah Everhart.


Cremation. A Celebration of Life Service was held Friday, December 6, 2019 at The Dickey Cottage, 2400 E. Elm, Harrisonville, Missouri with visitation that followed the service.
To order memorial trees or send flowers to the family in memory of John Edgar Everhart, please visit our flower store.