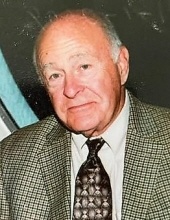 John grew up in Dover, Missouri and was a 1955 graduate of the Wentworth Military Academy in Lexington, Missouri. After graduation he served four years in the United States Coast Guard and was a college graduate of the Kentucky Wesleyan College.

On April 29, 1994, he was united in marriage to Margaret Frances Crawford-Mast in Independence, Missouri.

John was employed as a mechanic for the Greyhound Bus Company retiring from Greyhound in 1997. He was a member of the United Methodist Church in Blue Springs and the American Legion Post #21 in Independence, Missouri.

He was preceded in death by both of his parents.

Graveside funeral services will be held 11:00 a.m. Saturday, March 6, 2021, at the Strasburg Cemetery. Reverend Andrew Nelson will officiate. Full military honors will be conducted by the United States Coast Guard and the V.F.W. Post #3118 Honor Guard.

Memorial contributions are suggested to the Strasburg Cemetery and may be sent in care of the funeral home.