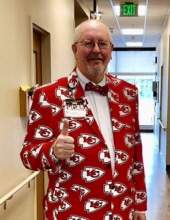 John was born October 2, 1955 to Lt. Col. George Edward Hoffman and Frances Evangeline (Korbut) Hoffman at Kadena Air Base, Okinawa Japan. John spent his early years in Panama where his father was stationed with the Air Force. Eventually the family was sent to Richards Gebaur AFB and settled in Grandview, Missouri.

Over the years, John provided care to thousands of patients both with his own physical therapy practice and later as an employee of Cass Regional Medical Center. He was fortunate to have found a career he loved and was able to enjoy it for a lifetime. He was the manager of physical therapy at the time of his death.

During his career John volunteered countless hours acting as the trainer for several area high school football and basketball teams including Ray-Pec and Harrisonville. He enjoyed working with these young athletes. He also had the opportunity to be the trainer for the Chiefs cheerleading squad—back when they had a co-ed cheerleading team that performed all types of tumbling and other gymnastic stunts. When kidded about working with cheerleaders, he would reply, “Well it’s a tough job, but somebody’s gotta do it.”

John also pursued other activities outside of his professional career. He was active in the Harrisonville Kiwanis Club Mo-Ark District and served as the Lt Governor presently and in the past was Governor & President. He has been a member of Kiwanis since 2/10/1987. John was also very involved with Shop with a Cop Harrisonville. John’s sense of humor came through, in 1998 he and a friend, David Coffelt , decided to impersonate the Blues Brothers which they did multiple times over the years. They even had their own Blues Brothers look-alike automobile. They performed in MO, KS, AR, & NE. Once they performed in front of 10,000 people. John has been a 2nd generation Santa Claus for over 35 years with Deborah by his side as Mrs. Claus for the past 4 years.

John was united in marriage to the Love of his life, Deborah on December 7, 2018 at CRMC surrounded by friends and work family.

John was preceded in death by his parents, step-mother Polly Hoffman and his older brother George E. Hoffman, Jr.

Memorial contributions may be made to the Shop with a Cop and may be sent in care of The Dickey Funeral Home, P.O. Box 432, Harrisonville, Missouri 64701.

If attending the services face mask are optional.
To order memorial trees or send flowers to the family in memory of John K. Hoffman, please visit our flower store.